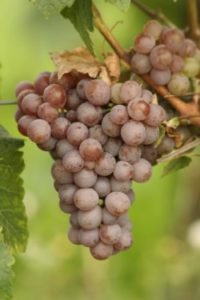 One of the most difficult to pronounce of wines, Gewurztraminer is a classic variety that comes from the Alsace in France, and is one of the most distinctive wines in the world. Blessed with a wild-spiced aroma that’s exotic and spirited, Gewurztraminer is a grape that can turn slightly pink if harvested late in the season. As such, the wine has a faint bit of potential bitterness, so to make a classic, non-bitter Gewurztraminer, one tactic is to leave a small amount of residual sugar in the wine to cover up any potential bitterness.

Plant in: Gewurztraminer is best when planted in well-drained soils in cool to cold climates. In warmer climes, the wild spiced nature of the aroma can be compromised.

Harvest Expectation: Gewurztraminer is best picked rather early to mid-season. Heat decreases the spiced aromatics and makes it hard to balance the wine.

Climate Regions: This is a cool-hardy grape and thrives best in a slow-growing season.

Vigor: Gewurztraminer is a moderately vigorous vine, but usually has a limited yield. That’s because it is sensitive to difficult weather in the spring.

Clusters: Gewurztraminer’s grape clusters are small and late in the season can often be tinged with a rosy or pink hue.

Gewurztraminer’s importance to the world scene: As a hard-to-pronounce wine, Gewurztraminer (geh-vertz-trah-mee-ner) sales are limited to hand-selling and in restaurants where Asian foods (Thai) favor the flavors and off-dry styles so often found.

Classic Styles of Gewurztraminer: Dry, lean, and with heady rose-petal and carnation scents. Other scents often seen in Gewurztraminer are gardenia, carnation, passion fruit, and kiwi.

Style of wine Gewurztraminer has made recently (non-classic versions): Some Alsace producers are now making the wines a lot softer and sweeter than ever. The best dry versions come from Alsace (the few left that are dry!) and Alto Adige (Sudtirol) in Italy.

Marketing Gewurztraminer: Gewurztraminer is hard to sell because of its pronunciation. It once was called (and still is in some areas) Traminer. (Gewurz in German means “spicy.”)

Aging (in winery, in consumer cellars): The driest versions age nicely; some of the very sweet versions likewise develop character with age.