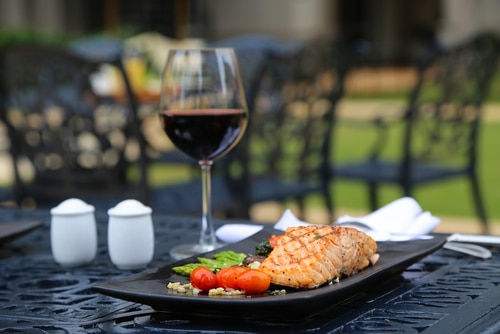 Wine and food pairings can be tricky. But they weren’t always so.

Most of our food/wine “rules” were set down in the 1950s and ‘60s, at a time when Americans largely ate a lot more simplistic foods, such as meat and potatoes.

At the time, with fewer foods and fewer wines, pairing wine with food was a relatively simple task.

It was then that the most common way to approach this was with a simplistic rule, like “white wine with fish, red wine with meat.” And by extension, we could envision pork, ham, and even duck with red wine. Did it work? Sometimes it did.

Though dry rosé was a lot better with ham than was red.

But then the issue of flavors came into play, and we began to see food getting more interesting and the old rules no longer applied. 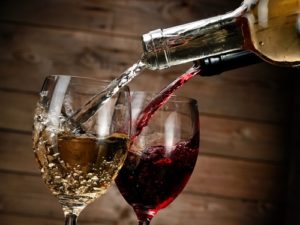 Duck done with a dark cherry sauce (Montmorency?) surely didn’t work with Pinot Noir. The same problem with the rule came up with other dishes. “Wild game with red Rhônes” didn’t work when the game was done Asian style with a hoisin sauce and red pepper flakes. “Zinfandel with elk” sounds exotic, but if the elk is done very rare, and has no fat on it, and the Zin is 16% alcohol, a rustic Pinot Noir would be better.

The ultimate point here is that there is no single “formula” for matching wines with foods. It all depends on the way the food was prepared, and the style of wine we are talking about.

(The only hard-and-fast rule I live by that usually works is, “bad wine goes best with bad food.”)

Classic example: Tomatoes used in a dish as a major ingredient call for dealing with the (usual) high acidity in the dish. Tomatoes can be “sweet” in a way. But acidity is the key issue and the best bet here is to use a wine that typically has good acid of its own (like paired with like), such as Barbera, Sangiovese, or Brunello.

Another classic idea: Rare roast beef has little fat, and thus isn’t a genuine “red meat dish” the way grilled steak is. To best deal with the delicateness of the meat, try a delicate red wine, such as a cool-climate, lower-alcohol (less than 14%) Pinot Noir.

In fact, this is a good lesson in how to avoid a clash of foods and wines. Think first of textures, weights, and flavors and try for compatibility.

We know, for instance, that oysters on the half shell and Chardonnay usually do not go well together, but a Chardonnay as delicate and tart as a great young Chablis from France could well be a sublime

Using that as an example of how hard-and-fast rules simply do not apply very often (though a few “rules” are universal), let’s look at some truths:

The heat of hot peppers: The hotter the dish, the less likely a red wine will work with it. The reason is the heavy tannins in the wine and the fact that hot peppers have a way of dominating taste-buds that need protection.

With dishes like Thai, Hunanese, Indian curries, and wasabi-based Japanese foods, red wine is almost always a clash. Also, higher-alcohol whites become difficult with such dishes, so many Chardonnays with their higher alcohols may not be a match. 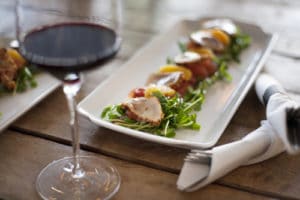 Slightly less absurd would be Viognier. Since these are white, they seem OK with such foods, but most are well over 14% alcohol and that creates a harsh environment on the palate.

What works best? Medium-dry to medium-sweet Rieslings seem to work best with such dishes. So do Gewurztraminer and Chenin Blanc, Gruner Veltliner, and Vinho Verde from Portugal.

Char-grilled steak: The old saying about red being best with meat was never intended as a universal truism and it can be seen when a delicate Pinot Noir (or a Beaujolais) is asked to accompany grilled meats.

Grilling meats makes for a savory and “char” flavor that would destroy the delicate nuances of the wine. A much better choice would be a Cabernet Sauvignon or a Syrah.

And if a dish lacks the right texture for a hearty red wine, perhaps a splash of olive oil on the dish could give the pairing a more logical taste. “Fixing the dish to match with a bottle of wine that’s already open is not hard to do.

It’s sort of like adding a little sweetness to a pasta sauce to harmonize the flavors.

Sure, the most basic rule of thumb is to drink anything you like with any dish, but it’s fun trying to make the wine and foods like each other!